The First Electric Truck in Town

As of May 10th, 2022, 568 electric vehicles (or EVs) were registered in Jefferson County. And most of them were made by either Tesla (132), Nissan (126), or Chevy (108). And most of those are likely one of three models, the Leaf, the Bolt, or the Model 3. But in Jefferson County there is currently only one mass market electric pickup truck, and it’s a Rivian owned by Brent and Wendy Davis.

Brent and Wendy (pictured) own several businesses in Jefferson County, including Brent Davis Construction and Lila’s Kitchen (also pictured). They also own several trucks. The Rivian is their first EV.

So far, they are impressed. According to the Davis’s, their Rivian R1T was number 2,987 off the assembly line and they had to wait a year and a half to get it. It has a range of 318 miles, which gets you to either Corvalis, OR, or Ritzville, WA, depending on where you’re going–or around the Olympic Peninsula on Hwy 101 before it needs recharging. The older style Nissan Leaf typically has a range of under 100 miles. Chevy Bolts are around 250. Tesla’s vary from 200 to 400 miles per charge depending on the model.

But where to charge them? Most EV owners report charging at home, using either a standard 110V outlet, or perhaps a repurposed 220V clothes dryer outlet. Also known as Level 1 charging, a 20-amp 110V outlet can supply between 2 and 5 miles per hour of charge. Level 2 chargers (which includes the dryer outlet) can charge from 10-60 drive-miles per hour of charge time.

The Davis’s Level 2 charger can fully power up their Rivian in 6 hours but needs a dedicated 50-amp circuit to do so. A Level 3 charger can provide a full charge in an hour, and an 80% charge in as little as 30 minutes, depending both on the model of the charger itself and the EV.

Looking to find an EV charging station near you? Apps like Plug Share are a great resource for vehicle owners, with regular updates and reviews of plug-in options all around the country. PlugShare is available both on desktop and via an app for your mobile device.

Jefferson County has some great resources on EV’s as well such as JeffersonCAN.org. 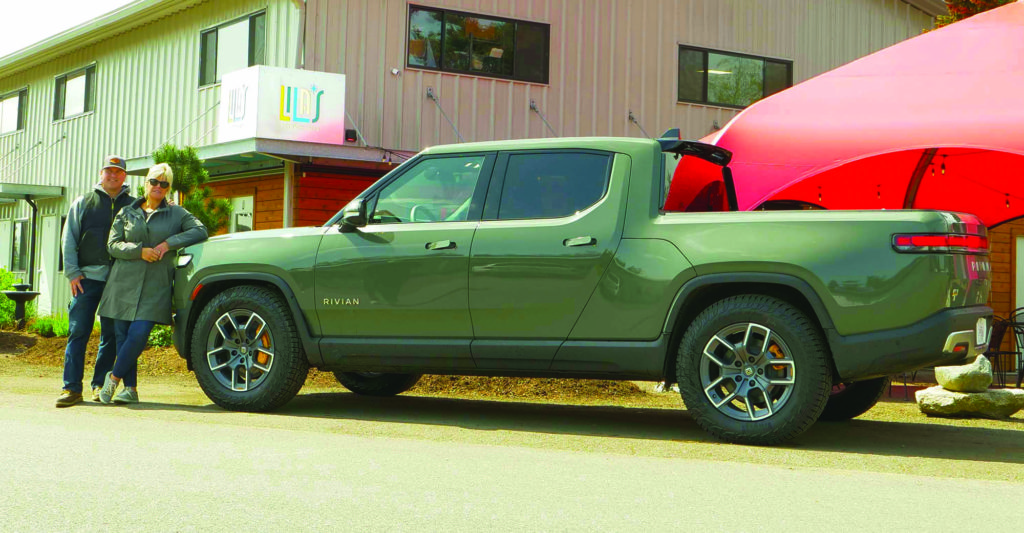