Why you will likely have a high bill for November

First, let’s dispel a myth about the PUD that we keep hearing.

The simple fact is the PUD has not raised rates since becoming an electric utility. We adopted Puget Sound Energy’s rates for January 1, 2013 and they became effective April 1, 2013 when we took over as the electric utility.

The rates have remained the same ever since.  The PUD Board has left rates unchanged for over 30 months as we commissioned a cost of service and rate study to determine what rates are appropriate for our community and the PUD’s financial position. PSE’s rates have changed numerous times since and are currently higher than the PUD’s.

So increased rates are not the cause of your higher than normal electric bill for November because they haven’t been raised in nearly 3 years.

What is likely responsible is the first cooler than normal heating month in a long while.  How much cooler?

The graph below from the National Weather Service in Seattle shows the range of what is normal for November in Seattle. The blue bar represents the observed daily high to daily low with the green representing the normal high-low range, the red the range from daily average high to record high and the 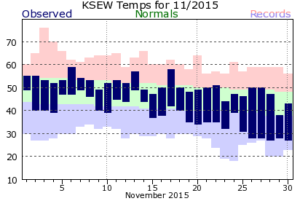 light blue the range of average low to record low. The first part of the month was mostly normal, but the later half was significantly below normal meaning your electrical heat source had to work harder to keep you comfortable. That will translate into higher heating costs for you.

December appears to be starting out warmer, and the forecasted El Nino generally doesn’t exhibit its impacts (warm and dry for us) until the winter officially begins. The weather has had a disproportionate impact on us with the storms and the cold of late, and don’t be too surprised if December’s weather as well as November has effect on your bill.