What Does a Meter Reader Do? 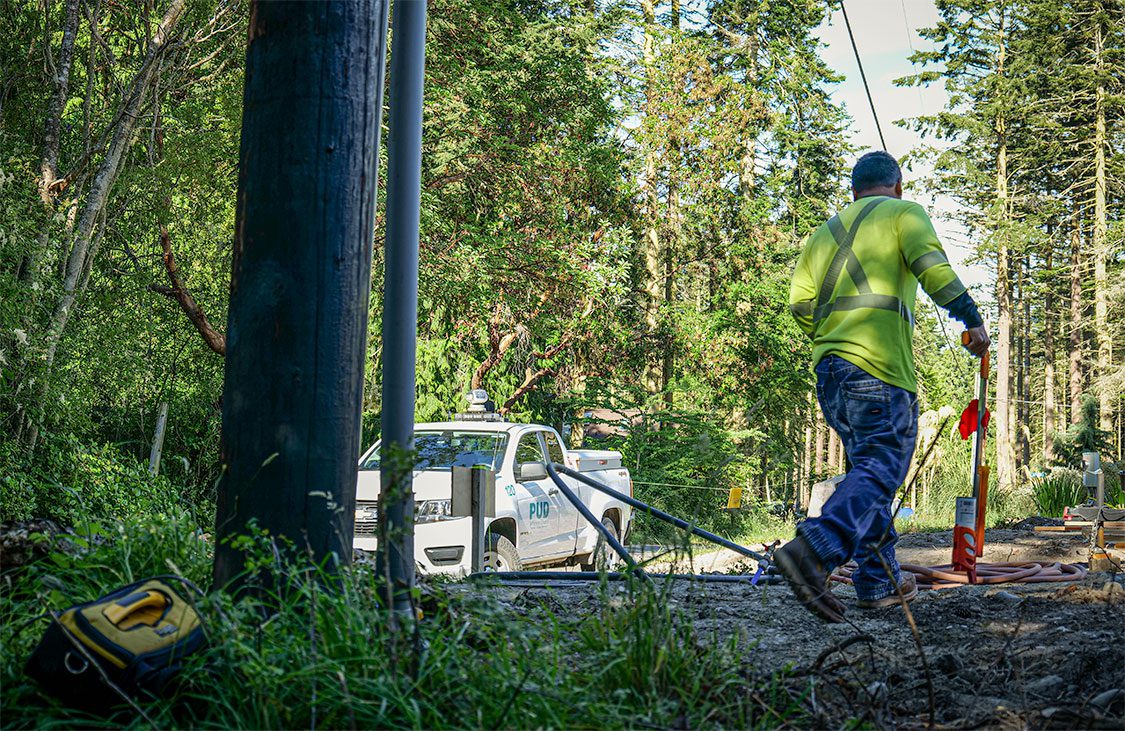 It’s a quiet morning on the backroads of North Beach in Port Townsend as Zach Barbieto, meter reader for the PUD, scans the ground. “We should see a little bump here,” Barbieto says, as a peak begins to form on his digital screen. “There we go.” Barbieto confirms the location on his mobile app, then continues scanning, marking the ground with red paint (for buried electric cables) as he goes.

Settling back into his mobile office, aka truck, Barbieto opens another application on a small tablet; virtual pins of all colors dot the screen across a map of the Quimper Peninsula. Each pin represents a task for his day and is updated in real time. There are pins for utility locates (usually generated by 811 calls), meter replacements, manual meter reads, meter disconnects, or meter checks (to verify a meter is working or not working).

Barbieto confirms that his next task is a meter swap.

The homeowner at the meter swap location greets Barbieto at the garden gate with a smile. He quickly outlines the process and explains there will be a momentary loss of power while the meter is disconnected. Incoming power to homes is often 240 volts and is never taken lightly. “For most meter changes the power is live,” Barbieto explains. “Some have shut-off switches, but regardless we always wear specialized gloves and have proper shielding.” 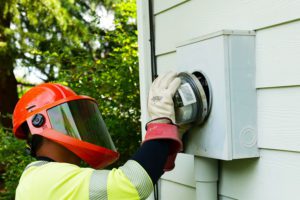 In a matter of minutes, the old meter is removed, the meter base’s internal connections are checked, and with a practiced motion, the new meter is installed.

Back in his truck, Barbieto is typing notes when his cell phone rings. An emergency locate is needed across town. This is the second emergency locate of the day. The first came at 1:30 in the morning. “The line crew called me in to verify the location of an underground fault,” said Barbieto.

At the PUD, meter readers and the line crew belong to the same union: the International Brotherhood of Electrical Workers (IBEW). Barbieto and his fellow meter readers are also called in by the line crew to help with traffic management when outage repairs take place along roadways.

The reason for the second emergency locate was apparent as soon as Barbieto arrived. A pool-sized puddle had formed in the middle of a parking area off Discovery, indicating a ruptured waterline. The job was not to find the obviously damaged water line, but to check if any underground power lines were nearby before excavation crews started digging up the pipe.

Actual meter reading comprises only about 30% of Barbieto’s job. And for the majority of the readings, he doesn’t get of the truck. The meter’s reading is collected simply by driving past it. When he does get out of the truck to read a meter it’s often because there is a problem. Or it’s a non-broadcasting “opt-out” meter specifically requested by a customer. 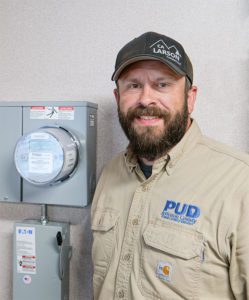 Born and raised on the Olympic Peninsula, Corey Larson is happiest when outdoors. The varied tasks of being a Meter Reader for the PUD suited Larson perfectly. Larson joined the department in early May. He had previous experience driving and and operating a septic pumping truck and performing underground locates for Strait Pumping. Larson lives in Gardiner with his wife and two kids. 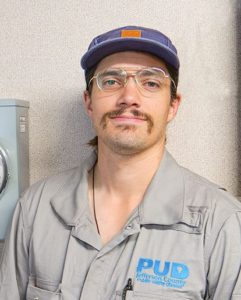 Josh Glenn lived in Michigan before making his way west to Port Townsend in 2021. He attended the PT School of Woodworking and worked for Frederickson Electric prior to joining the PUD as a meter reader in late June. Glenn is no stranger to the electric utility world. In Michigan he’d worked as a contract meter installer and his grandfather was a lineman for over 40 years.